Market Wrap: What happened with the top five cryptocurrencies this week? (February 18-25, 2022)

Russia’s invasion of Ukraine has dominated the news over the past 24 hours, and it sent financial markets tumbling.

The prospect of a large scale conflict with Russia has many concerned about the short and long term future of geopolitical stability. Not only has war typically decimated economies, increasing inflation, taxes, and public debt, it also displaces and kills millions.

That may seem obvious, but it’s important to be grounded when reading about financial market movements during a conflict.

Finance Twitter has been sharing the below image showing how markets have historically bottomed out during periods of invasion, only to rise significantly afterwards, leading many to give the advice to “buy the invasion”.

This pattern seems to be reflected in the crypto markets as well, with Thursday’s announcement that Russia officially invaded Ukraine, the price of the top five cryptos sank.

Market sentiment can be tracked with the Crypto Fear and Greed Index, which analyses emotions and sentiments in the market and rates it out of 100. The index is currently sitting at 27 out of 100, within the “Fear” territory. 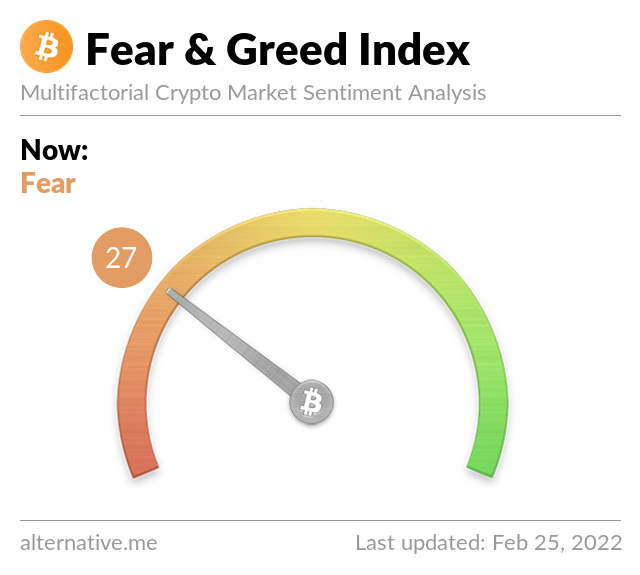 Bitcoin was on a steady downtrend all week, with a steep fall of over 10 per cent on Thursday to a low of $34,740 with the news of the invasion.

BTC has been recovering so far today, but is still down -4.8 per cent on the week.

Ethereum started the week above $2,900, its gradual slide down was accelerated Thursday, which saw a 14.6 per cent drop in 24 hours.

ETH’s price action has followed BTC with signs of recovering today, and is down 8.2 per cent for the week.

Solana has pushed out Cardano in market cap this week, having had a 6.5 per cent price rise in the last 24 hours. It’s not quite enough to get it back to the week’s high of $96, having crashed 13.9 per cent on Thursday to $77.

Crypto for the newbies: A guide to breaking down the most common concerns

there are no posts related to the current one