Market Wrap: What happened with the top five cryptocurrencies this week? (February 4-11, 2022)

Last week we asked if we could finally be coming out of the bear market, and it seems the hints of bullish sentiment have truly come to fruition this week, with most of the top five cryptocurrencies making double-digit gains.

A newcomer to the list even closed over 30 per cent gains over the week, placing it in the ten biggest gainers over the past seven days, and moving it into the top five cryptos by market cap (stablecoins excluded).

Traders seem to have shaken off the fear of rate hikes and inflation and are ready to bet on higher risk asset classes like cryptocurrencies.

Market sentiment can be tracked with the Crypto Fear and Greed Index, which analyses emotions and sentiments in the market and rates it out of 100. The index is currently sitting at 50 out of 100, within the “Neutral” territory, jumping 30 points over the past seven days, well escaping the “Extreme Fear” sentiment prevalent over the past weeks. 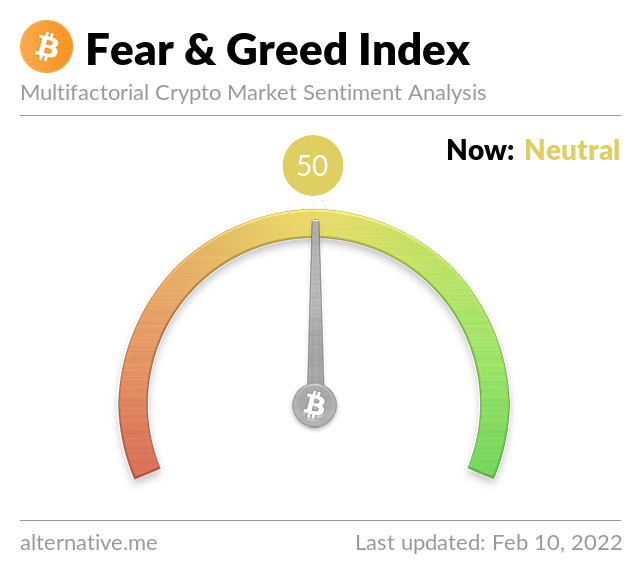 Bitcoin has been on a big run this week, gaining 17.9 per cent over seven days and reaching a high of nearly US$45,500, the largest price jump came on Saturday, gaining 9.1 per cent in 24 hours.

Bitcoin is still trending upwards, and is seeing support levels around the US$43,500 mark over the past three days.

Ethereum has made double-digit gains of 15.1 per cent over the past seven days, moving from a low of US$2,670 to top the week at US$3,261. Ethereum is seeing a further trend upwards, with the support levels around US$3,000.

A newcomer to this list, XRP (also referred to as Ripple) briefly overtook Solana in market cap around the end of January. This week it had a surge in price, gaining 33.7 per cent over the week, and saw $13.5 trillion added to its market cap, growing from US$29 trillion to a top of over US$42.5 trillion.

Traders are speculating that an ongoing lawsuit from the U.S. Securities and Exchange Commission will favour Ripple, the developer of the XRP token. Documents in the case were unsealed last week, and it’s expected a verdict will be reached soon.

Whilst less than some others on this list, Cardano has seen a price gain of 7.8 per cent in the last seven days.